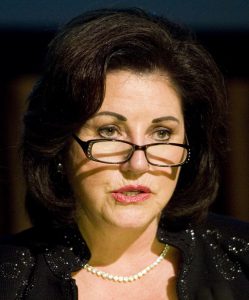 Chairman, Summit Bank Foundation
Shirley Nelson created and leads one of the most consistently highly ranked and highly praised independent banks in California. In 1982, Ms. Nelson and a group of investors created Summit Bank headquartered in Oakland, California. Summit Bank now has “three” branches (Oakland, Emeryville and Walnut Creek, California) and Ms. Nelson serves as Executive Chairman of the Board of Summit Bank and Chairman and CEO of Summit Bancshares, the holding company for Summit Bank.

Her one-on-one approach with her clientele, the special attention she pays to her employees, and the resulting financial successes enjoyed by Summit Bank have earned her extensive recognition. The Bank is in its 39th year of operation with 39 consecutive years of profitability and will celebrate its 40th anniversary in July 2022.

In 1998, Ms. Nelson founded the Summit Bank Foundation. The foundation has been dedicated to promoting volunteerism and corporate support for non-profits in the Bay Area.

The Foundation’s core focus has been education and health – first by promoting Grade Specific curriculums in Financial Literacy for K-12 students through the Newspapers in Education program, and then by providing Oakland high school students the financial support they need to continue their education. Since 2005, the Foundation has provided 44 scholarships through the College Scholarship Program, and we currently have five funds which provide eleven scholarships to students each year. These scholarships will go on in perpetuity.

Ms. Nelson has always had the drive to help others. As a testament to her philosophy towards civic commitment, Ms. Nelson’s long list of honors includes: