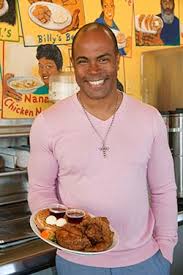 A third generation Oaklander, Derreck was raised by a single mom in West Oakland’s Acorn housing projects, one of our most underserved neighborhoods. His mom worked up to three jobs so he could have a better life. She taught him to work hard and selflessly for others, take pride in his community, and keep his word.

Growing up, Derreck saw people rise in the most inspiring ways and fall most tragically. Thanks to his strong extended family and community, Derreck would go on to high school, then Fisk University where he was a member of Kappa Alpha Psi Fraternity, which promoted brotherhood, service, and community advocacy. After graduation, he came home determined to serve the community that made him who he is. Today, he’s a successful entrepreneur making an incredible difference for Oakland.

In 2004, Derreck opened Home of Chicken and Waffles in Jack London Square. The restaurant would become a pillar of the Oakland community, a way to help Oaklanders who hadn’t been as lucky as Derreck had. While over the years, Derreck has created hundreds of jobs, he’s most proud of the fact that 70 percent of Home of Chicken and Waffles employees were formerly incarcerated people, folks who nobody would give a second chance until Derreck did. Derreck finds nothing more inspiring than helping turn someone’s life around, and seeing them get that first paycheck, that first apartment, or even that college degree.