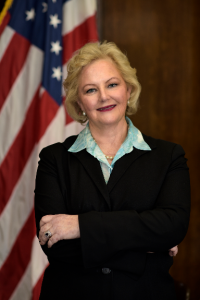 Alameda County District Attorney Nancy E. O’Malley is a nationally recognized expert in human trafficking, sexual assault, and domestic violence. She is known for her many innovative programs, including those to fight human trafficking, elder and child abuse, chronic absenteeism, sexual assault, domestic violence, and environmental violations, as well as creating a project to eliminate the backlog of untested sexual assault kits that is now a national program with federal funding. D.A. O’Malley is the first woman to serve as Alameda County’s elected District Attorney, an office once led by Chief Justice Earl Warren. D.A. O’Malley is a leader known throughout California and the country for her innovation and vision.

D.A. O’Malley’s professional accomplishments include monumental contributions in the legislative arena with numerous bills written by D.A. O’Malley being signed into law. She has drafted legislation that has included making courtrooms around the state accessible for victims with physical and intellectual disabilities, ensuring the sexual assault victims have rights in the criminal justice system and expanding the support available to victims of crime in California. Over the last ten years, her Office has obtained restitution orders of over $130 million for victims of crime in Alameda County. D.A. O’Malley founded the Family Justice Center.

D.A. O’Malley created the HEAT (Human Exploitation and Trafficking) Unit in 2005 and has led the statewide charge in combatting human trafficking. This has involved vigorously prosecuting traffickers, targeting the purchasers, as well as changing perceptions about those trafficked – treating minors as victims of crime, rather than perpetrators.

Recently, she was the first District Attorney in the nation to receive the 2016 American bar Association’s Margaret Brent Award for professional excellence and for advancing opportunities for women in the legal profession. In 2015, D.A. O’Malley received the Irvine Foundation Leadership Award and used the award funds to launch the H.E.A.T Institute, a research-based think-tank committed to ending all forms of human trafficking in California.